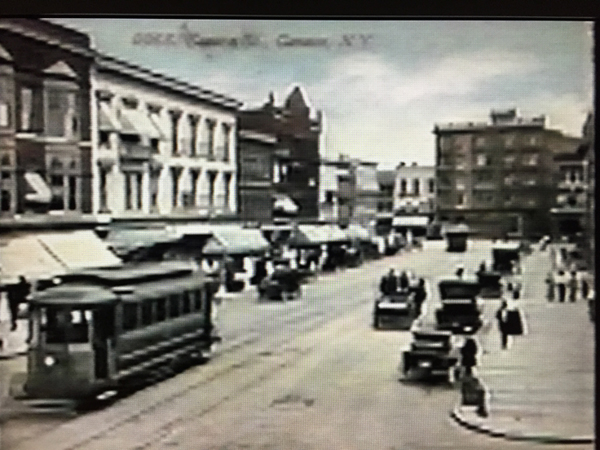 Woodrow Wilson was President of the United States.

Automobiles had appeared on the scene.

Standard Optical Company was a big business in Geneva.

And some folks got interested in starting a Rotary Club in Geneva. They felt the time was right for a local service club.

Leading the formation of the club was Geneva attorney Eddie John Cook. Cook linked up with the Elmira Rotary Club, which became Geneva’s sponsoring club. Twenty-five Genevans became charter members at the organizational meeting on May 12, 1919, at the Hotel Seneca. Altogether, 92 Rotarians from Elmira, Auburn and Canandaigua watched the installation of the first officers of the Geneva club: Edward Dean, president; John Farwell, vice president, and William Gracey, secretary.

One hundred years later, the Geneva Rotary Club is getting ready to celebrate this big milestone with a Gala 100th Anniversary Celebration on Saturday, April 27, at Club 86.

“This will be a fun and memorable evening,” said Gala Co-Chair Lisa Ventura, “and we invite the entire community to join in the celebration.”

For a reservation for the dinner, contact Karen Luttrell at dinner@genevarotaryclub.org. The ticket price is $100. Corporate and Business sponsorships are also available and interested persons should contact Tara Rago at 315-781-5000. Information on the dinner also is available on the Geneva Rotary Club Facebook page and the club website at genevarotaryclub.org.

Gala Co-Chair Jim Dickson noted that the evening will include historical tributes to Geneva Rotary over 100 years as well as the presentation of several awards and attendees will enjoy a special menu created for the gala occasion.

The Rotary International motto is Service Above Self and Geneva Rotary has embodied that principle over 100 years of raising money and supporting community service projects.

Rotarians also are active volunteers and the local club played a lead role in starting Rotary Camp Onseyawa on Seneca Lake in 1956. The camp offers a true summer camp experience for children with special needs and is supported by Rotary clubs throughout the region.

Shad Cook now serves as President of Geneva Rotary. “I believe the first president in 1919, Edward Dean, would be proud how the club has continued to offer a fun experience for members and contributed to the betterment of the Geneva community,” said Cook.

Geneva Rotary currently meets every Wednesday at noon at Geneva Country Club, but over time the club also met at the Hotel Seneca on Exchange Street, the Home Dairy on Seneca Street, the Lafayette Inn on Bean’s Hill, Seneca Lake Country Club, the American Legion, the Lionstone Restaurant on Route 14, Pronti’s Restaurant on Avenue E, the Belhurst Castle and the Ramada Inn. More than 80 men and women belong to the club today.

Part of the 100th anniversary celebration will be the presentation of the annual Springstead Award and the honoring of 24 Paul Harris Fellows. The Club established the Springstead Award nine years ago. The award is named for the late Ralph Springstead, who was a long-time Geneva banker and a member of Geneva Rotary. Springstead supported community service in a quiet and sometimes anonymous way. Past recipients of the award are the late Carl Fribolin, the Rev. James Gerling, the late Rosa Blue, David and Brenda Rickey, Mark and Mary Gearan, Judge Walter Gage, Ken and Eva Steadman, Nozomi Williams and Jim DeVaney.

The Paul Harris Fellow award recognizes Rotarians and community members for their achievements. The awarding of 24 in one year is unusual and commemorates the 100th anniversary of the club. For the 75th anniversary, 19 Paul Harris awards were presented.

Rotary International is composed of 1.2 million men and women around the world who donate their expertise, time and funds to support local and international projects that help people in need and promote understanding amongst cultures.  If you are interested in serving your community in a new way and are interested in becoming a Geneva Rotarian, please contact secretary@genevarotaryclub.org for more information or visit us on our website at www.genevarotaryclub.org. Geneva Rotary meets every Wednesday at noon at Geneva Country Club. 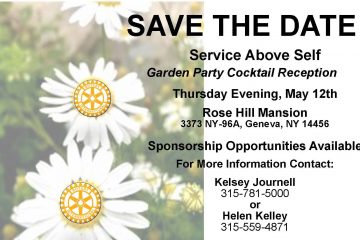 Service Above Self Garden Party

Join us for an evening of fun and fellowship on May 12 from 5:30 to 7:30 pm. Celebrate the good work that Geneva Rotary and our supporters do for our community. Mix, mingle and enjoy Read more…

The Geneva Rotary Club Chicken BBQ to benefit the 2018 Santa Train will take place Sunday, June 3, starting at 11 a.m. at the Hotel Exchange, 290 Exchange St. The proceeds from the chicken BBQ Read more… 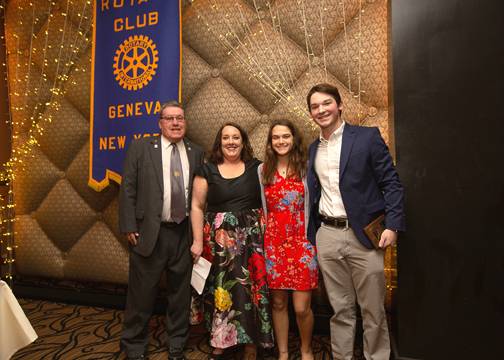 The Geneva Rotary Club recently honored members of the Geneva High School Interact Club and the Rotaract Club at Hobart and William Smith Colleges. The students received awards for their leadership and community service at Read more…